Bad at Sports: How to get to Mutualisms

‘Mutualisms’ is a collaborative curatorial project organized by Lise Haller Baggesen and Kirsten Leenaars, exploring the ways in which networks of friendship and artistic collaboration can be used as a model for curating. ‘Mutualisms’ is looking into artistic strategies for finding hospitality and exchange in the context of contemporary art practices as well our own social domain.

A conversation with the participating Mutualisms artists will be followed by a panel discussion on ‘art and reciprocity’ moderated by Dutch art critic Erik Hagoort and Chicago based writer Caroline Picard.

In general reciprocity is valued positively, and so in contemporary art. Reciprocity has become a buzzword, especially since the rise of interactive art practices, in which the public in one way or another is invited to participate. The appreciation of reciprocity has challenged the conventional distance and hierarchy between art, artists and the public. It has also triggered collaboration among artists. Yet, if reciprocity becomes normative, we may start to feel uneasy. Expectations for ‘something in return’ can restrict freedom and autonomy. In the arts a strong tradition has opposed reciprocity; art’s autonomy should prevail above exchange. So, the question is: what about art and reciprocity? Panel to be announced on our blogs at a later date.

‘Mutualisms’ is supported, in part, by public funds from the Netherlands Cultural Services, the Mondriaan Foundation and the Propeller Fund.

“The Wild West of Sweden”

Harold, you sure left me with a lot to sink my teeth into. You’ve made some interesting observations, especially in terms of the movies you referred to. The film “The Night of Counting the Years” was recommended to me while I was in Alexandria last year but I am yet to see it, so thanks for that reminder. Coincidentally I’ve also been looking into Egyptian hieroglyphs, not in relation to tattoos but while developing a font of my own. If time allows I will show a companion piece to “You’ll Never Walk Alone” where this font will play a part. It’s a readable roman alphabet but I’ve looked at Native American signs, hieroglyphs and Nordic runes during the process of creating it.

I imagine the figure in your work as an observer standing on the outside looking in, attempting to deconstruct a murky past from ruins, ashes and dust. The figure is hinted at through its very absence, like a ghost threatening to emerge. I believe that there is a very fine line between being enigmatic and pure obfuscation. When you strike the right balance it allows the viewer to enter your world without you having to fling the door wide open.

You are correct in that my work is about the figure, or a specific character, but I too have a deep interest in place and how it shapes our identity. Newspapers and media have called my Swedish hometown Avesta both “Little Chicago” and “The Wild West of Sweden” to describe the mentality that rules there. In the 70’s the local steel mill employed close to half the town population. My town shares certain characteristics with many other steel towns; it’s a bit rough around the edges and people like to enjoy a drink or two. My dad was in a sort of hillbilly gang when he was young; they were driving classic American cars and in the weekends they would fight rivalling gangs from neighbouring towns. These feuds were highly territorial and this turf mentality is something that I’ve too been confronted with while growing up.

To boot, my dad’s illness have brought with it some unwanted anxieties. Agoraphobia is a condition that develops when a person begins to avoid spaces or situations associated with anxiety. Typical “phobic situations” might include driving, shopping, crowded places, traveling, standing in line, being alone, meetings and social gatherings.

In my search for an appropriate location and form for my video I chalked up all of these things mentioned above. I remember my dad once telling me the reasons why he doesn’t like to go to the city centre, which made me think of these old towns in western movies where people hide behind curtains before the big showdown. I find it fascinating how the characteristics of one place can easily be transposed to another place, across time and space. Just as my hometown would stand in for Al Capone’s Chicago, the deserts in Southern Spain were used to emulate the Wild West of America. Displacement is a tool that I utilize in my own art making.

Previously you mentioned that some of your images origin from Africa and South America and I wonder what that means to you. Did you go there to make art, or was art an unintended by-product of sightseeing during a vacation? Does it matter to you how it all came about, and how important is your personal background to what you do as an artist?

Looking forward to hearing more about it! 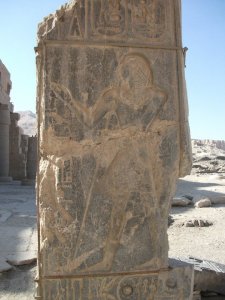 Magnus, The last line of your post here is entirely on point. It’s great. It’s interesting how you keep referring back to your father as a source of inspiration or point of departure to discuss your current ideas in your practice.  I know it’s a big jump in content or narrative here but the images you posted made me think of my trip to Egypt last October.  I’m not sure why.  Maybe it’s because when I see ink work I think of inscriptions and of personal stories.  In any case, I’ve been thinking about the film The Night of Counting the Years, a.k.a. Al-Mummia by Shadi Abdel Salam, with regards to this exchange we are having.  I’m considering how you allude to identity in your work here but also in our email exchanges. I think the film discuss a personal consciousness and identity that is inherently tied to history.  Hopefully you see the connections between your post and mine.

“The film casts its story in terms of the search for an authentic, lost Egyptian national identity, represented by the neglected and misunderstood artifacts ofancient Egyptian civilisation. However, the conflict between city and countryside suggests questions that are not resolved in the film, making it an ambiguous, unsettling reflection on the price of identity.”

It seems as if we are both examining the deterioration of the body and or of landscapes with regards to either physical or psychological constraint.  Your recent posts have also reminded me of Bill Morrison’s film Decasia: The State of Decay. (See two following images below).  On the one hand I seem to be exploring our Mutualism collaboration by working with content and imagery through space/place while you seem to be including the figure.  So here I present the body as atmosphere in contrast to your presentation of the corporeal.

Picks and plunders, compounds and hybrids of stories…

Magnus, I thought this might be of interest to you considering what we’ve been discussing and how it might possibly relate to your current work with your father.  This idea of placing yourself (or father) at the centre of your practice, while stretching your authorship and creating an identity myth.  In some ways, maybe we are asking each other to traverse between the opposing spaces we create; objects, illusions of places, and harder to reach localities.

“Gogolin seeks to evoke memories and feelings of longing, loneliness and desire and comprises two main elements. The first is a hand-crafted life-size wooden Polish chata (summerhouse) built in an Eastern European vernacular style, containing numerous drawings and paintings.  The second is a large-scale film referencing the make-shift cinemas that were set up in refugee camps in the Great Bialowieza Forest where Mania’s mother watched Hollywood movies.”

“This new commission is the culmination of a number of the artist’s lines of enquiry into the act of looking, representation and appropriation. At the heart of the project is an exploration of family history and roots refracted through art and cinema history, as well as that of Europe during World War Two. Much of Mania’s work explores his relationship to his parents’ status as refugees from the Second World War.  His mother is Polish and arrived in England via India. His German father was captured as a paratrooper and brought to England as a prisoner of war. The artist’s up-bringing was filled with tales of his parents’ extraordinarily turbulent experiences and these feed into the complex personal allegories that he creates in his work.”

Mutualisms
Create a free website or blog at WordPress.com.